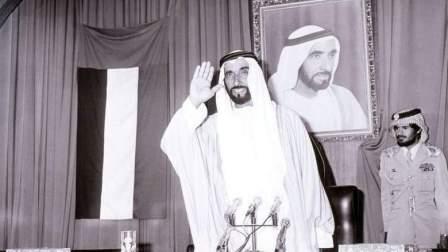 HH Sheikh Hamdan bin Zayed Al Nahyan, Ruler's Representative in Dhafra Region and Chairman of the Emirates Red Crescent , ERC, stressed that the announcement of President His Highness Sheikh Khalifa bin Zayed Al Nahyan declaring 2018 as the "Year of Zayed" represents the nation's loyalty to the memory of the founding father, the late Sheikh Zayed bin Sultan Al Nahyan, who established the foundations of the UAE's humanitarian and charitable structures.

He also highlighted the place held by the creator of the nation's prosperity in the hearts of his children, and his key role in building the country, establishing its foundations and providing all types of wealth and luxury to its citizens.

Sheikh Hamdan made his statement on the occasion on the announcement of President His Highness Sheikh Khalifa bin Zayed Al Nahyan that 2018 will be the "Year of Zayed," as a national event to celebrate the life of the founding leader, Sheikh Zayed bin Sultan Al Nahyan, as well as the 100th anniversary of his birth, along with his role in establishing and developing the UAE, and his local and international accomplishments.

He stressed that the country's current level of security, stability and prosperity is the result of the enlightened goals, strong vision and great wisdom of Sheikh Zayed, which have become a shining light and a path followed by President His Highness Sheikh Khalifa bin Zayed Al Nahyan, Vice President, Prime Minister and Ruler of Dubai, His Highness Sheikh Mohammed bin Rashid Al Maktoum, His Highness Sheikh Mohamed bin Zayed Al Nahyan, Crown Prince of Abu Dhabi and Deputy Supreme Commander of the UAE Armed Forces, and their brothers, Their Highnesses the Rulers of the UAE.

HH Sheikh Hamdan added that the accomplishments of Sheikh Zayed bin Sultan Al Nahyan, from creating the federation with his brothers, the Rulers of the UAE, to establishing the country's foundations, maintaining its sovereignty over many decades and launching its journey of development and advancement, have placed Sheikh Zayed among the world's most prominent leaders. The country's citizens and others living on its land have experienced security and stability, after their long suffering, due to his noble deeds and wise vision, which enabled him to achieve social solidarity and fairness while ruling his people, for everyone to live together as one family, he added.

His Highness stressed that the UAE's prominent stature as the largest international donor of development aid is a realisation of the logic and vision of Sheikh Zayed, crowning his efforts to represent the country's commitment with its founding principles, international humanitarian message, and its efforts to establish its position as the global humanitarian capital.