World XI tour to Pakistan is bigger than cricket 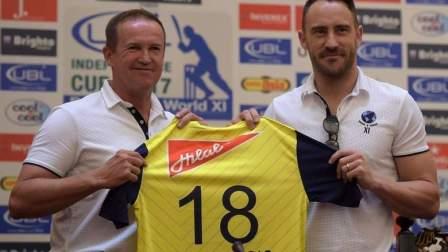 Faf du Plessis believes the World XI tour to Pakistan is bigger than the game and can help revive international cricket in the country.

The South African will captain a star-studded team of players from seven countries in a three-match Twenty20 series against Pakistan in Lahore over the next four days.

"It's fair to say that this will be the first time when we actually come into play cricket for something which is much bigger than the game itself," he told reporters hours after arriving amid tight security. "We look forward to what will be a great week of cricket."

The Pakistan Cricket Board tried to win back the confidence of foreign countries over security concerns, but only Zimbabwe visited the city two years ago for a short limited-overs series.

Working closely with the International Cricket Council's Pakistan Task Force team headed by Englishman Giles Clarke, the PCB managed to draw international players and prove once again it's safe to play matches in the country.

The ICC has sent security experts to monitor the three T20s at the Gaddafi Stadium, while at least 500 meters of the main road leading to a five-star hotel where teams are staying is completely cordoned off.

"When this whole thing came about, you do think about that (security) sort of things," he said. "But as soon as we spoke to the people who were in control of the security, the planning ... as a player all you want was that peace of mind and they gave it to us.

Flower took feedback from his younger brother Grant, who has been the Pakistan team's batting coach the past three years.

Clarke said the PSL final in March helped the PCB's cause to organise the World XI series.

"I think if the PSL final had not been played here, I don't know how easy this would have been," he said. "Everybody had the courage and the confidence to play here and that was an absolutely essential for this series."

PCB chairman Najam Sethi said he had support of the ICC in organising the series and hoped it will pave the way for next month's Twenty20 international against Sri Lanka and with a planned three-match T20 series against the West Indies.

"We know this is a small step in many ways but a huge leap for Pakistan," he said. "We now expect more doors to open."