Why all expats should learn Arabic language 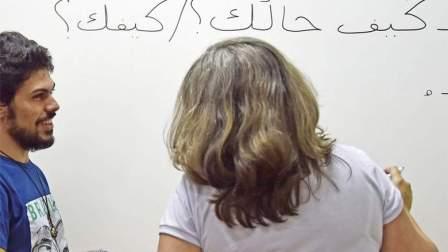 Learning the basics of the Arabic language is important for expats living and working in the UAE, as it will immensely help them in their daily lives and careers, experts advise.

Mahmoud Bay, academic supervisor, The Mother Tongue Center, told Khaleej Times why it is crucial for expats who do not speak the Arabic language, to put in the effort and learn the language.

He explained that the Arabic language, which is in the top five most spoken languages in the world, goes back thousands of years and is linked to incredible culture, religion, tradition, heritage and history.

"Chinese, English, Hindi, Arabic and Spanish are the most languages spoken in the world and it is very important to learn Arabic if you are living in an Arabic country."

He said the best way for expats to learn Arabic is to start with classical Arabic.

"It was written in the same language back then as it is written today, whereas other languages have changed throughout history."

"You will be able to return to books that are more than 1,500 years old, because the language and the grammar are the same," added Bay.

He said that anyone who wants to learn the Arabic language and doesn't know where to start from, needs to begin by learning the basics.

"At the center, we teach classical Arabic, which is the dialect or the formal language that is used in media, newspapers, books and in governments."

"We start by teaching this and provide books the help teach expats all the important elements - so they can start speaking Arabic."

The most important aspects in learning basic Arabic for expats should be words that cover daily life, activities and hobbies, he explained.

"This will help them interact with others if they travel to an Arabic country for example, or if they work with Arabs."

Bay said that after the students learn the basics, they can move on to spealised Arabic - for diplomatics and businesses.

"When expats arrive to the UAE from the West for example, it's vital for them to learn about the culture and the heritage of the Emirati society - to understand that the Arab culture is not necessarily the same as the Western culture, and this will also help with the basics of Arabic."

Bay said expats can quickly learn how to communicate and greet in Arabic, after one or two lessons - two hours a class.

"With more effort and lessons, they will begin to advance in the language and can begin to express themselves."

Learning the Arabic language can be done, but in a step-by-step process, he stressed.

The center teaches basic Arabic, pre-intermediate, intermediate and advanced, each level has books and hours the students must complete.

"To speak Arabic fluently, students will need to complete 650 hours and eight books."

"They will then be able to be fluent in Arabic and read books and newspapers, watch Arabic television programmes and easily understand."

Bay said many students from all backgrounds come to the center because they simply have an interest in learning the unique Arabic language.

"We have a student from each nationality that lives in Abu Dhabi, including Salvador, Honduras, Kenya, China, South Korea and Germany."

"But the majority of our students are from the US, UK, Canada, Australia, France and India."

Bay pointed out that the top reason for expats learning the language is because it immensely helps them with daily life and work.

"Some students study Arabic because they are interested in the culture, whereas some have already studied Arabic before and enjoyed it so they want to continue and become fluent."

"The majority of the expats are learning Arabic because it helps them a lot with their careers."

"70 per cent of the students learn Arabic for work, 30 per cent for interest in culture and the language," he added.

Nonetheless, he said the students love learning the language because they believe it is unique and fundamentally linked to culture and history.

Mahmoud Bay said the Arabic language has more dialects than one can imagine, which is why it is important to learn the standard classical Arabic first.

"We have many dialects in the Arabic language, some are very famous and understood by most Arab people, including Egyptian and Syrian dialect."

"But some dialects might be very difficult and different to understand, such as Moroccan, Tunisian and Algerian."

He highlighted that each Arab country has its own special dialect, however, there is an exception, which is the Gulf dialect or the Khaleeji dialect, which is a dialect that sounds very similar to one another - the UAE and Saudi Arabia for example.

The Iraqi dialect is also closely linked to the Gulf or the Khaleeji dialect.

"Most students prefer to learn the classical Arabic language, instead of learning a dialect from different countries, which can be more difficult."

"There are many dialects, and that is why it is important to first learn the classical Arabic, so it can be understood by most," he added.

Top 30 Arabic words and greetings all expats should know

Learning the Arabic language may not be a-walk-in-the-park for all expats, however, with a little time, effort and patience, the beautiful language can be learned and understood.

The basic and important words and greetings, which expats may encounter on a daily basis - whether at work, popping to a grocery store, ordering at a restaurant, or simply bumping into an Arab stranger - should be learnt after spending some time living in an Arab country.

> Al Salam o alaikum - Peace be upon you

> Al-hamdulillah - Praise be to God