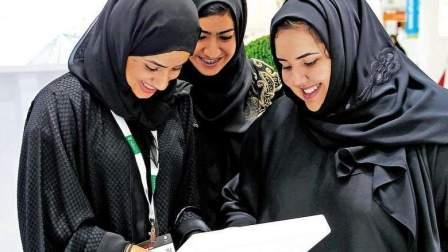 The UAE is celebrating the 3rd Emirati Women's Day, in recognition of the contribution of the nation's women, and their role in the development and advancement of the country.

"The first celebration was in the year 2015, and in light of this occasion, the UAE people celebrated the great path of the late founder, Sheikh Zayed bin Sultan Al Nahyan, who established the foundations of wise leadership and what this country has achieved, where women were fortunate to bear the fruits of its renaissance," Sheikha Fatima said.

"There has been continuous attention to and advancement in the role of women, under the support of President His Highness Sheikh Khalifa bin Zayed Al Nahyan, especially in the recent years, where women's issues across all areas and sectors have become a top priority for developmental policies," she added.

The strategic vision of the state is to implement policies and programmes for women, as part of the national agenda to give importance to women's education. Today, the number of women in schools exceeds the number of men, and 65 percent of the university graduates in the UAE are women.

H.H. Sheikha Fatima Bint Mubarak has actively promoted the role of Emirati women and raised their status in society. She had recognised the importance of enhancing the role of women through institutional work. The Abu Dhabi Women's Association, the first women's organisation in the country, was founded on 8th February, 1973, after which the General Women's Union was established in 1975.

As part of the process to empower women in all sectors, there are special military bodies for women in the UAE named after talented Arab women such as

The College is a military training institute for women, which has been training women since 1992. It conducted a six-month training course, which included theoretical and military training for the women, so that they can take part in maintaining the safety and stability of the country, along with their fellow brothers.

Emirati women have been able to take part in the UAE's renaissance and take on the highest positions, due to the attention of the late Sheikh Zayed.

The greatest witness to the policy of enabling Emirati women, the state gave eight women ministerial portfolios out of the 29. In an unprecedented historical achievement at the local and regional level, Dr. Amal Abdullah Al Qubaisi was elected the Speaker of the Federal National Council (FNC), the first woman to head a parliamentary institution at the regional level.

During the 16th legislative term of the Federal National Council, a total of 330 candidates from all the emirates of the UAE competed in the 2015 legislative elections. Of these, 74 were women. The total number of women participating in the elections made up 38.94 percent of the candidates. A total of nine women were elected, which made up 22.5 percent of the total 40 members.

As part of the steps and initiative taken by the UAE to enable women, who comprise 49.3 percent of the population, His Highness Sheikh Mohammed bin Rashid launched the UAE Gender Balance Council at a government summit in Dubai in 2015.

The "UAE National Strategy for the Empowerment and Entrepreneurship of Women in the UAE 2015-2021" was also launched to provide a guiding framework for all government, federal and local institutions and civil society organisations, to develop plans and programmes to help Emirati women to be more capable and proactive.

This year, the women of the UAE will celebrate the 3rd year of the Emirati Women's Day, especially those holding senior positions in the Ministry of Foreign Affairs and International Cooperation.

According to a report issued by the ministry on the occasion of International Women's Day, the permanent representative of the state to the United Nations is occupied by a woman for the first time.

In addition to the seven women ambassadors and consuls in Spain, Sweden, Portugal, Milan, Kosovo, Hong Kong and the Republic of Montenegro out of the 157 diplomats, 42 women were working in diplomatic missions, demonstrating their exceptional work in air defence and civil aviation, military, judiciary, public prosecution, education and other units of the Ministry of Interior.

Women's contribution to economic activity and the labour market has steadily increased since the establishment of the UAE Businesswomen's Council with around 23,000 businesswomen working in the local and global market and running projects worth over AED50 billion.

This excludes the number of women working in banking, which is one of the most important economic sectors in the country and makes up approximately 37.5 percent of its working force.

Emirati women have proven their merit as a major driving force in the community and now are forging ahead confidently armed with science, knowledge, experience and determination to increase their role in the country's sustainable development.