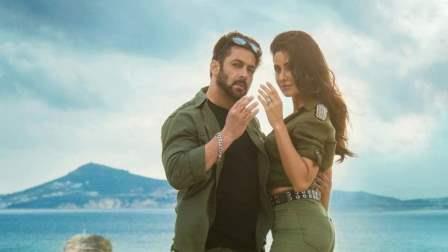 Salman Khan and Katrina Kaif starrer "Tiger Zinda Hai" has brought some much needed cheer to the Bollywood box office in a lacklustre year, by crossing the Rs 150 crore mark since its release.

The movie, which hit the screens on December 22, got an extended opening weekend courtesy Christmas which was on Monday.

The Ali Abbas Zafar directorial has minted Rs 151.47 crore in four days, according to its makers.

With an opening day collection of Rs 34.10 crore, "Tiger Zinda Hai" continued to pull in the audience to theatres over the weekend and minted Rs 35.30 crore and Rs 45.53 crore on Saturday and Sunday.

On Christmas day, fans of the "Dabangg" star contributed in generating a collection of Rs 36.54 crore, thereby taking its cumulative total to Rs 151.47 crore, read a statement.

Backed by Yash Raj Films (YRF), the film is a sequel to the Kabir Khan-directed "Ek Tha Tiger" and marks the return of Salman and Katrina together on-screen after five years.

Made on a budget of Rs 150 crore, including advertising and publicity, "Tiger Zinda Hai" released in 4,600 screens in India and 1,100 screens abroad.