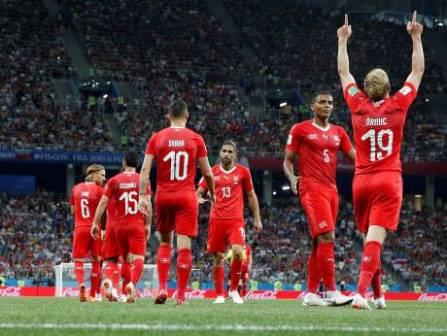 Nizhny Novgorod: Switzerland moved through to the World Cup last 16 on Wednesday, after a draw over Costa Rica but will be without captain Stephan Lichtsteiner because of suspension.

A 93rd minute own goal by the unfortunate keeper Yann Sommer from a Bryan Ruiz penalty gave the central American side a deserved 2-2 draw on a night of late drama in Nizhny Novgorod.

That wiped out a Swiss lead which had lasted only two minutes after substitute Josep Drmic slotted home to apparently give the Swiss an undeserved victory.

Earlier Blerim Dzemaili had thumped home in the first half to give Switzerland the lead against the run-of-play in the 31st minute against the team who finished bottom of Group E.

That goal was cancelled out by Kendall Waston’s header in the 56th minute, the central Americans first goal of the tournament.

The draw ensured Switzerland finished second in the group behind Brazil.

But Switzerland will be left counting the cost after yellow cards for experienced defenders Lichtsteiner and Fabian Schaer means they will miss the game against Sweden in Saint Petersburg on July 3.

Lichtsteiner received a yellow card for a late tackle on Daniel Colindres in the 37th minute.

It was the Arsenal player’s second yellow of the tournament after being booked in the opening game against Brazil.

But finally they were rewarded by defender Waston’s header from a second-half corner.

The goal ensured that Costa Rica would not be the only team who did not score at this World Cup.