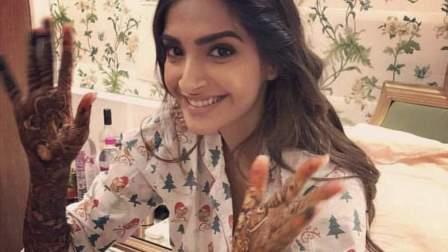 Close friends and family members thronged the house which was adorned by lights and soaked in the festive fervour.

Sonam and her groom-to-be, Delhi-based businessman Anand Ahuja, looked colour co-ordinated in pastels. While Bollywood's fashionista Sonam looked radiant in a peach and grey ethnic outfit with statement jewellery as she sat down to get intricate henna designs done on her hands, Anand looked suave in a salmon sherwani.

Photographs and video snippets from the function were splashed across social media. In one photograph, Sonam is seen surrounded by four women, including Bollywood's 'henna queen' Veena Nagda, as they draw out customary designs on the "Veere Di Wedding" actress' hand and feet.

Among the first ones to arrive at the venue were cousins Janhvi Kapoor, Khushi Kapoor and Shanaya Kapoor, who were dressed in ethnic wear. Jhanvi and Khushi chose Manish Malhotra ensembles for the pre- wedding ceremony.

Sonam's sibling Rhea Kapoor was dressed in a subtle cream ensemble, brother Harshvardhan was in a white kurta pyjama teamed with a grey Nehru jacket, and father Anil chose an all-white ethnic outfit.

It was Arjun and uncle Sanjay Kapoor, who looked bright in an orange and red kurta respectively.

Sanjay was emotional about his niece's wedding as he posted a throwback photograph on Instagram earlier on Sunday, and wrote: "20 years back when we danced at my wedding Sonam. Now I will be dancing at yours. Time flies."

Among Bollywood celebrities, there were Jacqueline Fernandez, Siddhanth Kapoor, Rani Mukerji, Varun Dhawan and filmmaker Karan Johar. Designer Kunal Rawal too was seen at the celebrations.

Sonam and Anand will get married on Tuesday, but a formal 'mehendi' and 'sangeet' function will take place on Monday evening.