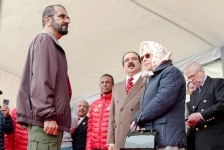 On the sidelines of the endurance event, His Highness Sheikh Mohammed met with Her Majesty Queen Elizabeth II of Great Britain. He applauded the excellent organisation of the event, which celebrates its 75th anniversary this year, and highlighted the strong ties between GCC countries and Britain in endurance races.

His Highness Sheikh Mohammed followed the 120-km endurance race in which 110 riders from the UAE, Bahrain, and a number of European countries vied for the title.