Sheikh Mohammed is the most followed Arab leader on Twitter 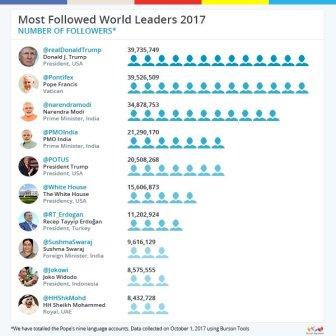 Social media has changed the way global leaders communicate with their citizens and the world at large. It has opened instant channels of communication, with Facebook, Twitter and Instagram providing the opportunity of 'live' interaction with the leaders.

Among Arab leaders, King Abdullah II of Jordan is the latest to join Twitter, and was welcomed by Queen Raina, who also became his first follower.

His Highness Sheikh Mohammed bin Rashid Al Maktoum, Vice-President and Prime Minister of the UAE, and Ruler of Dubai, also welcomed him to the world of Twitter.

We went ahead and checked the Twitter handles of Arab leaders with the most followers.

According to Twiplomacy, Sheikh Mohammed is one of the most followed leaders around the world in 2017. It is also worth noting that he is the only Arab leader in the top 10 list. The Dubai Ruler is joined by the US President Donald Trump, Indian Prime Minister Narendra Modi, Turkish President Recep Tayyip Erdogan and Indonesian President Joko Widodo.

Vice-President and Prime Minister of the UAE, and Ruler of Dubai

Custodian of the Two Holy Mosques

Minister of Foreign Affairs and International Cooperation of UAE

President of the United Arab Emirates