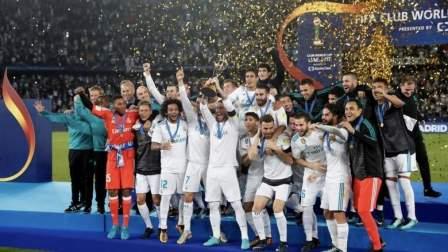 Ronaldo's 53rd-minute strike gave Real their second world title in a row, the third in the last four seasons, and ended Gremio's hopes of pulling off what would have been a huge upset.

The European champions, enjoying the backing of most neutrals at the Zayed Sports City Stadium, dominated as expected, with 20 shots on goal to Gremio's one, but the much more limited Brazilians still made their lives uncomfortable.

Overall, it was the Spanish club's sixth world title as they also won the old Intercontinental Cup -- now recognised by FIFA -- three times.

Real also extended European dominance with 10 wins out of 13 since the club cup was started in its current form in 2005, reflecting the region's financial dominance in the sport

The dynamics of modern football mean that the best South American, Asian and African players line up against, rather than for, the teams from their own continents, and Real's side on Saturday included Brazilians Marcelo and Casemiro.

Gremio coach Renato Portaluppi won the old International Cup as a player with the same club in 1983 when his two goals gave them a 2-1 win over Hamburg SV but a repeat never looked on the cards.

FIFA president Gianni Infantino has admitted the tournament needs a revamp and wants to replace it with a new one featuring up to 24 teams.

"The ball never forgives you," said Renato. "We conceded a goal from a free kick, where the ball went through the middle of the wall. It happens.

We showed that we can play on equal terms with any team. They are a machine but we left with our heads high."

Gremio survived the first half with their goal intact thanks to some resolute, last-ditch tackling.

Pedro Geromel cleared Daniel Carvajal's shot off the line with goalkeeper Marcelo Grohe beaten, Isco and Luka Modric both fired shots wide and Walter Kannemann made a last-gasp saving tackle on Ronaldo as he was about to shoot.

Edilson had Gremio's best effort with a 35-metre free kick that dipped and swerved just over the bar -- their only shot of the match. Real broke through after Ronaldo won a free kick around 25 metres from goal. As usual, the Portuguese took it himself and blasted a low shot which flew through the wall, bounced and squeezed inside Grohe's near post.

Ronaldo had another goal disallowed for a hairline offside decision. After that Modric burst through the midfield and fired against the post and Grohe made more saves from Ronaldo and substitute Gareth Bale to keep down the score.