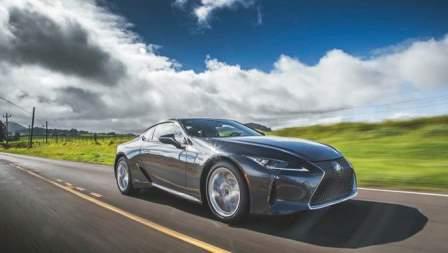 Lexus is - and has always been - a soft-edged luxury brand that makes some value-for-money vehicles. They were never known for building racy coupes, until the magnificent LFA entered the fray. With a race-derived 4.8-litre V10, it was able to churn out over 550 horses, twice the power of Toyota's very potent 3.5-litre V6, and yet they managed to make it lighter. It's also famous for its aptly named 'Breaking Glass' commercial where a champagne flute was cracked by the sound of its exhilarating exhaust. Now, that was a supercar! The RC coupe which followed is a little less inspiring. A lot less, I'd say! But now they've made something that fits in between the two. It's sexy all over, priced at a silly Dh395,000, and it's called the Lexus LC. Here's our word on the 500hp hybrid variant.

At its Dubai launch, the Lexus LC grabbed serious attention like any yellow-painted car should. But it wasn't just that. This thing has that quintessential low-slung, wind-cutting silhouette, with the added attraction of some slightly-bizarre styling features that would make an Instagrammer's dream come true.

This may be a 2+2 coupe, but it isn't small by any stretch. But 'stretch' is a key attribute about its design: most of the body panels and fixtures have been given a stretched effect almost as if they were shaped by the wind by going too fast. The low-placed nose is characterised by an iteration of Lexus' signature "spindle" grille and "L"-shaped daytime running lights combined with proper bejewelled LED headlamps - the thinnest projectors in the world.

The complexity that follows is an indication of the industry's advancements in body design, and more importantly, production technology. When placed alongside rivals, the LC reduces them to an archaic mish-mash of metal set on wheels. And to keep the fluidity of design, the LC has concealed retractable handles.

In parts you'd wonder if they've gone too far with the design, especially the 'L' motif which is all over - in the front fender and the multi-layered tail lamps. Maybe, but at least it's original. The wheels, though, are too ostentatious; the 21-inch design is fitting, but the dual-tone effect with aluminium and black paint makes it look amateurish. But nothing stops you from a quick aftermarket swap!

The LC is sharply-styled and visually unavoidable. Cars in this segment are built to be aerodynamic and deliver shock value and that is exactly what the LC does.

The interiors combine the retro-feel seen in the current range of Lexus' architecture with some of that LFA magic. The detail-obsessed Takumi craftsmanship is everywhere you place your eyes or hand on, and the lashings of supple leather, exotic alcantara and soft-touch plastic bring a fresh sense of opulence. I'm not a big fan of the F-Sport seats of Lexus cars, but the red leather upholstered seats in the LC are contoured to meet most body types, eliminating pressure points. And I love the detailing in other places too, like on the door panels that are completely wrapped in alcantara. you have lines that are like nerves on a leaf. and the floating door handles are special too.

There is a very high-tech cockpit. Besides the 12.3-inch centre infotainment screen set on the horizontal elements of the dash, it has its own unique Lexus' Remote Touch Controller, which is basically a mouse-pad that can recognise hand-writing. They've also given it a dynamic instrument cluster alongside a digital tachometer with bezels that moves to accommodate other info, when not in Sport mode. Let's not talk too much about the rear cabin though. It's a place for kids and handbags.

Although hybrids are seen as beacons of green technology, like the Toyota Prius, automakers concentrate on the other variety, the performance hybrids, which is what the LC is. This one uses Lexus's Multi Stage Hybrid System. It combines the 3.5-litre V6 petrol engine that makes 295 horsepower and 350Nm of torque, and with the aid of an electric motor - powered by lithium-ion batteries - another bunch of horses is added, bringing the total to 354 horsepower net. On paper, that kind of output looks good, but we had to see how this thing rolls.

So we slid into the driver's seat and pushed the start/stop button and, as expected, only the electric motors came on and they're graveyard silent. The V6 motor only comes on when the system recognises a surge in power requirement - meaning when you punch or floor the pedal.

Now, remember, this is a near-half-a-million dirham car and, so, we're expecting fireworks. But all that came was propulsion not much faster than a hot hatch. Flat out, it will take 6 seconds or less to get to 100 km/h, so it is quick but not quick enough. That being said, everything else is pretty much in place. Its 10-speed automatic transmission lets the engine rev quickly to the redline and drops quicker to pick the next ratio, and while doing so, it provides a raspy exhaust tone, almost like a racecar, which we liked. The 6-piston 15.7-inch ventilated discs upfront and the 4-piston calipers with 14.1-inch ventilated discs at the rear have a huge say in how you bring your ponies to a halt, regardless of speed.

The EPS provides decent steering feel and accuracy, much improved over the RC and Lexus cars in general. It combines nicely with the taut suspension. And surprisingly, it delivered decent ride comfort even with those 21-inch wheels.

You can engage further by pulling those magnesium paddles behind the wheel or by switching to Sport mode by toggling the stalk atop the instrument cluster. By doing that, the tachometer centrally aligns itself, the ride hunkers down, steering stiffens and the gearbox mapping becomes more aggressive.

But in the end, it's not an all-out racer. It's more a grand tourer.

With the heavy price tag come all the mandated safety options you'd imagine. There is an airbag in every corner, so you don't have to worry about bumping your knees, head or shoulders in the case of a fender bender. You also have a bunch of safety algorithms or what we call electronic nannies to maintain safe dynamics at all times; they include, traction and stability control, ABS with EBD, Brake Assist System etc. There are also rear camera, Hill Start Assist Control, Pre-Crash Safety System, Lane Change and Lane Keep Assist with Blind Spot Monitor and Front and rear corner sensors.

While practicality may have been an afterthought in this car, there is enough space to fit a large suitcase and some extras in the boot. But its battery eats some of that space.

The infotainment has its highs and low. The remote touch isn't as intuitive as a computer mouse. Lexus should improve it further or just abandon it completely. The layout of the menus are clear, but the fonts are "#basic", as YouTubers would say. And although there is an excellent music system on board, it takes several steps to register the Bluetooth connection. You do have the option of using the USB ports or mini-jack.

The Lexus LC is a sexy sports coupe that will turn the spotlight on itself wherever it goes. Its original design - both inside and out - has enough complexity for a car and lashings of luxury materials make its cabin a special place to be in. The hybrid powertrain keeps it brisk, but it isn't nearly as fast as the silhouette or price suggests. The noise it makes by revving out the smooth V6, you do get a kick out of. but by doing so, it negates the healthier side effects of driving a hybrid. Overall, if you ignore the cramped rear seats, it does shine as a 2-seater grand tourer with decent power, competent road holding dynamics and a compliant ride quality.

Pros: Original styling on the outside; beautifully-crafted interiors; build and ride quality