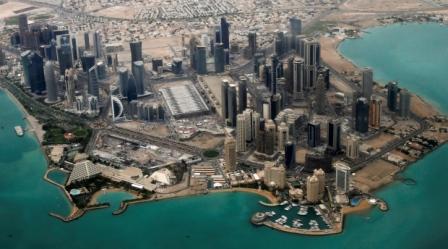 The four Arab countries boycotting Qatar vowed on Friday to take additional steps against Qatar after it refused to accept their demands to stop funding and supporting extremist ideology.

Saudi Arabia, the United Arab Emirates, Egypt and Bahrain in a joint statement on Friday said that Qatar was thwarting all efforts aimed at resolving the crisis and said it intends to "continue its policy aimed at destabilising security of the region".

The Arab nations maintained that the Qatari government's intransigence and rejection of the demands reflected the extent to which it was linked to terrorism and showed its continued attempts to sabotage, undermine security and stability of the Gulf region, and deliberately harm the interests of the people of the region, including residents of Qatar.

They stressed the Qatari government has thwarted all efforts and diplomatic moves to resolve the crisis, reflecting its intention to continue its policy of destabilising security of the region.

The Arab countries also extended their appreciation to Amir of Kuwait His Highness Sheikh Sabah Al Ahmad Al Jaber Al Sabah for his efforts to resolve the crisis.

They deplored the lack of tact and respect showed by the Qatari government towards the Kuwaiti efforts by leaking the list of demands in order to thwart the efforts of Kuwait and return the crisis to the starting point in clear disregard to diplomatic norms and respect of the mediator.

The four nations asserted that their demands have been made as a result of hostile practices of the Qatari government and its continued violation of pledges, particularly the Riyadh Agreement signed by Qatar in 2013 and the Supplementary Agreement and its Executive Mechanism, in 2014.

They expressed their deep surprise over the unjustified refusal by the Qatari government to the legitimate list and logical demands aimed at fighting terrorism, preventing embracing and financing it, combating extremism in all its forms, and safeguarding Arab and international security.

The list states that: "All such applications shall be approved within ten days from the date of their submission, otherwise they shall be null and void."

All political, economic and legal measures and procedures shall be taken in the form deemed appropriate and timely in a manner that preserves their rights, security and stability towards a hostile Qatari government policy.

They also emphasised that the Qatari people are an integral part of the Gulf and Arab system. The measures taken by the four countries are directed at the Qatari government to correct its course, which seeks to break up the GCC system and Arab and international security, destabilise the regional countries and interfere in their affairs.

Sovereignty guaranteed by international law in accordance with the Statute of the States of the Gulf Cooperation Council, the Charter of the League of Arab States, the Charter of the Organisation of Islamic Cooperation, the Charter of the United Nations and the norms of relations between States, all stipulate not to interfere in the internal affairs of the states of the region or to destabilise their security and stability, with the aim of spreading chaos and destruction, undermining their internal security, supporting and financing regional and international organisations as terrorist entities, in a flagrant violation of international law and the outcomes of the American-Islamic Summit held in Riyadh in the presence of 55 Islamic countries, the United States of America, represented by President Donald Trump, the presence and approval of all countries of the historic summit outcomes, including the Government of Qatar.

Top US official due in Kuwait on Monday

> US Secretary of State Rex Tillerson is likely to visit Kuwait on Monday.

> State Department fears the dispute could drag on for weeks or months.

> Germany says its intelligence will play a role in resolving the dispute.

> Four countries cut off ties with Qatar over its support to terrorist and sectarian groups aimed at destabilising the region.

> Qatar backed radical movements in the wake of uprisings in 2011.

> Credit rating agency Moody's has cut its credit outlook on Qatar to negative.