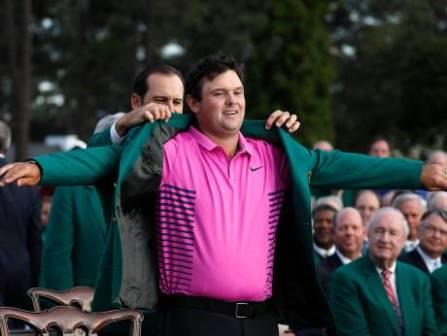 The 27-year-old US Ryder Cup firebrand out-duelled three-time major champion Spieth and Fowler, who birdied six of the last 11 holes, in an emotional back-nine drama that sparked roars and thrills at Augusta National.

Reed, who had never cracked 70 in 12 Masters rounds until this week, became the fourth straight first-time Masters winner and the ninth first-time major winner in the past 10 such events, the only exception Spieth’s British Open win last year.

In addition to the iconic winner’s green jacket, Reed won $1.98 million from an $11 million purse.

Reed, whose breakthrough came in his 17th major start, finished on 15-under 273 with Fowler second on 274 after a closing 67 and Spieth third on 275 after matching the low final round in Masters history with an eight-under 64.

“I started nine back,” said Spieth, who would have made the greatest comeback in Masters history had he won. “I wanted to shoot a low round and see what happens, if something crazy happens.”

Fowler sank a 7-foot birdie putt on 18 to pull within one and keep Reed under pressure to the 72nd hole.

“We gave our all out there and made P-Reed earn it,” Fowler said. “I was happy to make that last putt.”

Needing a two-putt par from 25 feet at 18 to win the title, Reed ran his first putt four feet past the cup then sank the comeback effort and pumped his fist in celebration.

Reed fended off last-pair partner Rory McIlroy on the front nine until the Northern Ireland star faded to a 74, sharing fifth on 279 with his dream of a Masters win for a career Grand Slam foiled again.

Reed’s approach at the par-5 13th clung to a bank above Rae’s Creek, his title bid nestled with it, but he escaped with par to stay deadlocked with Spieth for the lead at 14-under.

Reed sank an eight-foot birdie putt at the par-4 14th to regain a one-stroke lead.

Spieth clipped a tree branch off the 18th tee and needed three to reach the green, where he missed an 8-foot par putt to match the 18-hole course record and settled for closing with his lone bogey.

Spieth became only the seventh player to shoot 64 in the last round of the Masters, the first since Bo Van Pelt in 2012.

Spieth surged on the back nine starting with a 27-foot birdie putt at the par-3 12th, the same hole where he endured a quadruple-bogey 7 meltdown in 2016 that cost him the lead and his back-to-back Masters bid.

American Charley Hoffman aced the par-3 16th with a 6-iron, the 20th time the hole has surrendered a hole-in-one.

And his playing partner, compatriot Tony Finau, birdied six consecutive holes from the 12th to 17th but missed a 10-footer at 18 that would have tied the Masters record birdie streak.

World number one Dustin Johnson fired a 69 to share 10th on 281 and retain his rankings lead. Spieth, Rahm or Justin Thomas could have overtaken him by winning, Thomas firing a 73 to finish on 284 and foil his chance.

England’s Paul Casey flirted with a course record 63 before closing with back-to-back bogeys in a 65.

Webb Simpson, the 2012 US Open winner, made back-to-back eagles at the seventh and par-5 eighth.

Tiger Woods, playing his first major event since 2015 in a comeback from nagging back pain and spinal fusion surgery, fired a 69, his week’s low round.

“It was possibly the highest score I could have shot today,” Woods said. “All in all it was a bittersweet ending.”

The 14-time major champion sank a 29-foot eagle putt at the par-5 15th and birdied 17 but a closing bogey denied his goal of level par overall.

Woods, a four-time Masters champion, failed to deliver on promise showed in two top-5 tuneup finishes but said he was glad to be back.

“I really missed it,” Woods said. “I made too many bogeys. I made too many mistakes. But overall it was a lot of fun. It felt great to be able to compete again.”