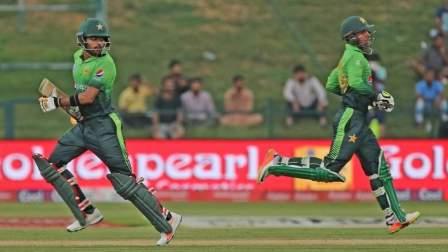 Earlier, Pakistan had won the toss and there were no experiments as skipper Sarfraz Ahmed elected to bowl with both teams unchanged.

Openers Danushka Gunathilaka and Dilshan Munaweera started boldly by striking Usman Khan and Imad Wasim for boundaries. Sarfraz turned to reliable Hasan Ali but Gunathilaka welcomed the pacer with a stylish whack for a maximum.

Finally, a run out brought the breakthrough and ended 43 runs partnership. Sadeera Samarawickrama joined Gunathilaka and tackled Faheem Ashraf, Shadab Khan and Mohammad Hafeez with ease. The duo took 13 runs from 13th over bowled by Hasan and Gunathilaka brought up his maiden T20 fifty.

Once again it was a run out which ended a partnership as Samarawickrama (32) returned after a 63-run partnership. Bowlers got among wickets as Shadab had Gunathilaka (51) caught.

New batsman Seekkuge Prasanna was also run out. Looking to push the scoring, skipper Thisara Perera perished as Sri Lanka slipped from 106 runs for 2 wickets to 111 for five.

Faheem was brought back and he turned the match with wickets of Isuru Udana, Mahela Udawatte and Vikum Sanjaya. Faheem's three for 16 runs was the first hat-trick by a Pakistani bowler, first in the UAE and only the sixth overall.

In reply, Fakhar Zaman was run out and Udana, luckily, got Babar Azam as Pakistan hit 31 for two wickets. Ahmed Shehzad carried on with few boundaries but Perera had the opener caught for 27.

The Lankan skipper then scalped Shoaib Malik to make it 55 runs for four wickets.

However, Mohammad Hafeez and Sarfraz steadied the innings but Pathirana ended the 39-run partnership.

With 25 needed off 18 balls, Perera got himself on and trapped Imad Wasim. Further drama unfolded as Sarfraz (28) was run out by a throw from Gunathilaka.

Shadad, the new batsman, struck a first-ball boundary to make it 16 off 12 balls. In the last over, he struck a straight six and hit the winning runs with a ball to spare.

Sri Lanka, with inexperienced players, had put up a creditable performance but Pakistan youngsters stood tall when it mattered.