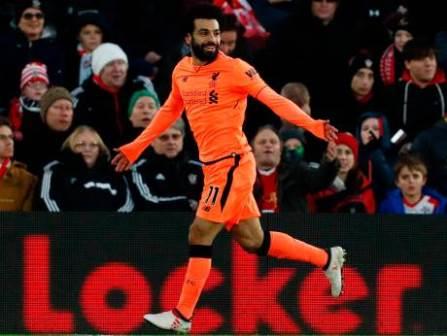 Southampton: Virgil van Dijk celebrated his first Premier League win as the world’s most expensive defender on his return to Southampton as Roberto Firmino and Mohammad Salah ensured Liverpool ran out 2-0 winners at St Mary’s on Sunday.

Van Dijk was jeered by the home support following his £75 million (Dh381 million) move to Anfield in January, but got his revenge by shutting out a toothless Saints side who drop into the relegation zone.

By contrast, Liverpool moved back above Tottenham into third and to within two points of bitter rivals Manchester United in second following the Red Devils’ defeat at Newcastle earlier on Sunday.

In a recurring theme of Liverpool’s season, Jurgen Klopp’s men made a fast start by scoring inside 10 minutes for the ninth time this campaign.

Van Dijk began the move as he cut out a cross with his head before Liverpool ‘keeper Loris Karius freed another former Southampton player, Alex Oxlade-Chamberlain.

His pass to Salah was turned inside by the Egyptian for Firmino to apply the finishing touch for his 20th goal of the season.

Southampton responded well to going behind, but lacked a clinical touch as their wait for a first home league win since November continued.

Pierre-Emile Hojbjerg had the hosts’ best chance for an instant reply when he fired too close to Karius at the back post.

The German goalkeeper was then put to work by headers from Guido Carrillo and twice by James Ward-Prowse but wasn’t unduly troubled.

And Liverpool showed why the sides are battling at different ends of the table with a stunning move to double their lead three minutes before half-time.

Firmino returned the favour from the first goal with an audacious backheel into Salah’s path and he slotted the ball into the bottom corner for his 22nd league goal of the campaign to close back to within one of Harry Kane in the golden boot race.

Salah missed a huge chance to move level with the Englishman when he side-footed into the side-netting with the goal at his mercy after Alex McCarthy had saved Firmino’s initial effort 20 minutes from time.

Van Dijk had been subjected to criticism following shock defeats by Swansea and West Brom and conceding a last-gasp penalty as Spurs snatched a draw at Anfield in his previous three outings.

But the former Saints captain will scarcely have had an easier 90 minutes at St Mary’s as Southampton failed to muster any danger after the break.

More of Liverpool’s former Southampton contingent, Sadio Mane and Adam Lallana, should have rubbed salt in the home side’s wounds when they both fired wide when clean through.

However, the visitors were able to coast through the final stages with Firmino and Salah even replaced in perfect preparation for their return to Champions League action at Porto in the first leg of their last 16 tie on Wednesday.