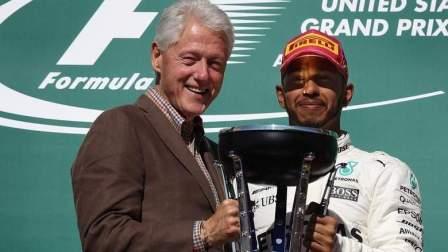 Lewis Hamilton claimed his fifth consecutive victory at the Circuit of the Americas in Austin, making him the most successful driver at this venue. The Briton has extended his lead to 66 points, going into the next race where he can claim the fourth title of his career. Finishing second was title contender Sebastian Vettel followed by his team-mate Kimi Raikkonen in third place.

At the start, Vettel snatched lead moving into first corner from Hamilton. Since the latter had the engine advantage the former succumbed to losing the lead again at Lap 6 in a wheel to wheel battle. After that the next 50 laps were a strategic game of chess for both the Silver Arrows and Prancing Horse outfit, in which the Briton and the two Ferraris prevailed.

Red Bull Racing on the other hand, had their lone driver Max Verstappen intimidating the Ferraris and the Mercedes. The Dutchman threatened the two Ferraris at the penultimate corners of the race for third place and second. For the Red Bull Racing driver a two pitstop strategy was planned making him the faster driver during the closing laps.

The Maranello squad followed the Milton Keynes one, by pitting Vettel for the second time on the same lap, which was Lap 38. While Valterri Bottas became a victim to that strategy, he had to drop as far behind as fifth, and had to finish in the same place despite a late switch to fresher tyres on lap 52.

While Vettel and Verstappen managed passing Bottas, the Dutch made a controversial move on Raikkonen to cross the finish line third. While the 2007 World Champion blocking Verstappen from attacking second place, the young driver went off the track with all four wheels outside the line, while attempting his overtake. The stewards promptly penalised the Dutch with a five second penalty for that move, and had to be escorted out of the podium room in a tragic and controversial twist.

The penalty propelled Raikkonen back to his podium, but the Finn was running second till Lap 52, until he had to play out Ferraris strategy. The Finn wait for his German team-mate to surge up to third, and a classic Ferrari swap was initiated. Although Vettel made a brave move on Hamilton's gunman Bottas, he struggled towards the end threatening Raikkonen's podium to a raging Verstappen.

In the final corners of the race, Raikkonen succumbed to Verstappen, while blocking him due to a slowing Vettel ahead of him. From what it appeared the 20 year old dutch was charging on fresher tyres than the Finn, and although his Ferrari was the quicker one, Vettel who was ahead of him seemed to be struggling with his tyres.

The race had four retirements starting with Renault's Nico Hulkenberg on the second lap due to loss of oil pressure. For the German, its his fourth consecutive retirement at the Austin track, and third consecutive retirement of the season. At the start Kevin Magnussen shunt Pascal Wehrlein onto the gravel, by hitting the left side of his car after which the German had to retire his car on Lap 9.

The Austin track rolled out a red carpet for the drivers before the race in a unique format before the lights went out. Amidst the long list of VIP attendees were many celebrities and A-listers including former American president Bill Clinton, Usain Bolt, Owen Wilson and Michael Douglas to name a few. With F1's new American owners wanting to make a spectacle at every sport to attract, the one at the Texas circuit was a success with crowds even bigger than the previous editions of the race. The next race will be held at the Autodromo Hermanos Rodriquez circuit in Mexico city on the following weekend spanning from October 27-29, 2017.