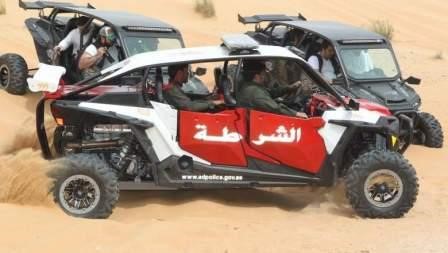 Abu Dhabi was recently ranked as the second best place in the world to live and work in. The safety and security of citizens, expats and tourists are key when it comes to being ranked amongst the best nations in the world, Abu Dhabi Police told.

In an exclusive statement, the General Directorate of Abu Dhabi Police, Department of Security, said that authorities have adopted comprehensive strategies and initiatives to insure the safety of the community.

With more than 34,000 police officers currently in Abu Dhabi, by 2021 the Capital will have more than 47,500 officers, thus representing one officer for every 58 people -- further enhancing the safety of the popular city.

"Our country has become a safe and secure oasis and an attractive environment that provides for the wellbeing of all citizens, residents and visitors."

"Abu Dhabi Police vision in adopting a series of initiatives, which are directly linked with the community, have seen a positive interaction by residents."

The continuous progress by Abu Dhabi Police reflect the systematic practices that are implemented according to the best international practices.

The police official highlighted that the initiatives launched within the past two years in particular, are immensely enhancing the awareness of security.

"The initiatives are based on the importance of the role community members. Our role is to not only maintain security, but also raise awareness, under the support and patronage of our wise leadership, who have provided all the possibilities to improve the performance of the police."

One of the many prominent strategies launched by Abu Dhabi Police is to maintain security, despite a rapidly growing city, which has been inspired by the principles of the Abu Dhabi 2030 vision.

"The plan is to focus on maintaining a whole and safe society, despite the rapidly rising numbers of residents."

The official said that community members thus play a vital role when it comes to maintaining a safe city, and that no role goes unnoticed, which is why Abu Dhabi Police created various campaigns that allow residents to engage in - including 'We Are All Police,' which has so far seen a whopping number of 7,476 applicants.

The initiative, which was launched by Major General Mohammed Khalfan Al Romaithi, the Commander-in-Chief of Abu Dhabi Police, in September 2016, allows Emiratis and expats to be trained to become community police officers.

More than 200 nationalities live in Abu Dhabi, and as the population continues to grow by an average of more than seven per cent each year, so does the social responsibility.

"With the rise of residential communities, police officers concern of security also increases, we therefore want to insure that we're devoting the collective participation of the communities in all matters related to security."

'Horseback Police,' which made a come-back in July 2016, after a 10-year gap, is another initiative that is maintaining security.

The mounted police, which was first launched in 1974, are equipped with modern arrangements, while training is provided for horses and the 300 policemen -- 60 in Abu Dhabi City, and the rest deployed in Al Ain and in the Western Region.

"The mounted police will continue to work - the sight of policemen on horseback patrolling the neighborhoods helps provide the sense of security."

The 'Off-Road Motorcycle Patrols,' launched in January, also helps enhance the safety concerns of the public, explained the official.

The initiative provides quicker access and response to accidents, particularly in hard-to-reach areas, including camping sites, wild areas and farms.

"The off-road motorcycle patrols work to ensure that police patrols arrive at the scene in the shortest possible time."

He said that this effective way of patrolling: "Enhances police presence in the public, and provides the community with a sense of confidence."

"Bicycle patrols help maintain the security of the community, while insuring police presence is available at all locations."

The cyclists wear police uniforms, while some wear civilian clothing, and often located around commercial and residential areas, as well as beaches and parks.

"The cyclists, ride for more than 30 kilometers each day and speak at least two languages, allowing them to easily communicate with nationals and expats."

Another initiative launched is the 'Happiness Vouchers' (gift-vouchers), which are handed to law-abiding road users.

"The initiative makes the roads safer and spreads a culture of commitment to traffic rules, while delighting motorists by rewarding them with a 'happiness voucher,' delivered by the Happiness Patrol."

Abu Dhabi Police also launched 'e-Services,' as well as various campaigns on their social media platforms, including Facebook and Instagram, which have played a major role in providing the public with easy access and communication to authorities, while helping spread safety awareness.