Emirati is youngest Arab to trek to North Pole 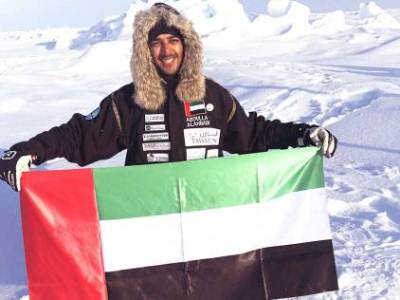 Abu Dhabi: Braving temperatures of minus 40 degree Celsius, arctic winds, and having to pull equipment weighing 45 kilos, a young Emirati managed to get through all of those challenges while trekking to the North Pole, and in turn, becoming the youngest Arab to achieve the feat.

Abdullah Al Ahbabi, 26, set off with his team to the North Pole on April 14, with the trek across 100 miles of snow and thin ice taking eight days to complete — two days ahead of schedule.

“The whole thing went really well, there were obviously a lot of challenges and bumps along the way, but we managed 100 miles of journeying across the North Pole in eight days without any major injuries. Our original schedule was to complete the trek in 10 days, but we managed to finish with two more days to spare, so all in all it was very successful,” said Al Ahbabi, who arrived back in the UAE at the end of April.

“I’ve had to readjust and recover since I’ve been back, I lost four kilos while I was at the North Pole. You can’t expect to go to the North Pole for eight days and come back the next day ready to go back to the office. The journey was physically and mentally very demanding, but I’ve had the time to recover now and I feel good and back to my normal levels,” he added.

Al Ahbabi said his first day at the North Pole was the most challenging one, describing how he had to face temperatures he had never experienced before.

“The hardest day was the first one for sure because I never experienced minus 40 degrees in my entire life, and that really came as a big shock. You prepare and train yourself for it, but when it finally hits you it’s a whole different experience. I told myself that I better adapt to these conditions if I was going to be able to successfully complete the journey.”

As well as having to deal with the freezing temperatures, Al Ahbabi explained that another big challenge was the actual trekking itself, which he said would last for 12 hours a day.

“We were out moving for 12 hours on most days, we would do it in 90-minute pushes and then have 10-minute breaks. It was very demanding to be on your feet for most of the day, even more so for the fact that we were pulling all of our equipment on a sled behind us.

“We even had to do climbing because of pressure ridges that were formed as a result of two plates of ice colliding. We had to pull our equipment with us during those climbs, and we’re talking about equipment weighing 45 kilos,” he added.

Another challenge was to overcome the monotony of the trek. “One of the big issues was boredom. When you’re in a team of five people going in a straight line, it’s really hard to communicate with one another, plus the winds also make it very hard to speak, and so you’re just moving in a straight line for a big part of the day.

“I knew I had to keep my mind busy and distracted and so I would listen to audio books or I would think about my family and friends. I always kept my mind on the move so I would remain focused and not let the stress get to me,” he added.

Even going to sleep could end up creating challenges the next morning according to Al Ahbabi.

“Drifting was a challenge, you’re moving on ice that is less than one metre thick and so as a result you’re always drifting. On one day, we noticed that we had drifted nine kilometres south while we were asleep, and so the next day we had to catch up on the distance we lost. So the challenges are constant, even when you’re sleeping.”

Al Ahbabi, who also professes to be an advocate for clean energy, said the journey also strengthened his belief in the need to protect places like the North Pole, which face the most immediate threats due to climate change.

“I personally drive an electric car, so I’m a very big advocate for clean energy. Going to the North Pole definitely makes you realise the possible impacts of climate change. We usually just read about what can happen, but in this case I got to personally visit an area that is going to be impacted.

“The North Pole is truly one of the last frontiers on earth, and with the sea ice melting coupled with the ice thickness getting smaller, it’s going to make it much harder to send expeditions to the area. So being able to visit the North Pole, which we can possibly lose because of climate change, has really increased my resolve and support for cleaner energy,” he added.

With his journey to the North Pole now completed, Al Ahbabi said he hoped his accomplishment could act as a positive message for other youth in the Arab world.

“It’s a great personal achievement for me, but one of the reasons I did this and what I hope to come out of it is a message of positivity for the young people in the Arab world. I wanted to show that if you really believe in something and want to go for it, then you can truly make the impossible become possible.

“When I decided to make the journey to the North Pole, I had no experience in skiing or anything remotely close to what I was going to have to do once I reached there, but I still put my mind to it and I managed to get it done. I pushed my own boundaries and limits and went above them, and that’s the message I want to send to young Arabs. We can do anything we set our minds on.”