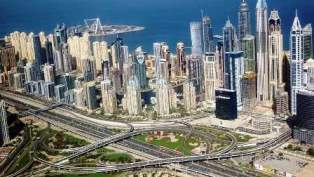 Dubai registered 69,000 real estate transactions exceeding Dh285 billion in 2017, according to the Dubai Land Department (DLD). This compares to property transactions worth Dh259 billion entered through 41,776 deals in 2016.

The rise in transactional volumes and value was owing to the boom in demand for off-plan properties in 2017.

Sultan Butti bin Mejren, director-general of DLD, said: “The figures for total transactions, including sales, mortgages and others, confirm the current strength of the Dubai real estate market.”

“Twelve months ago, the residential ready market was witnessing stabilisation and bottoming out in some cases. Off-plan developers took notice and began to offer competitive payment plans, many of which spanned beyond promised handover dates. While this has led to a short-term delay in an expected overall market price recovery, it has also led to a 45 per cent annual increase in off-plan home transactions, resulting in a 26 per cent annual leap for overall residential unit sales. Therefore, these figures come as no surprise given the current nature of Dubai’s buyer market,” observes Haider Tuaima, head of real estate research at ValuStrat.

“The DLD figures affirm what we have been saying throughout the year: despite the gloom and doom prognostications on offer by the analyst community, transactions have continued to increase steadily, defying expectations. Some of the reasons are well-known: post-handover payment plans and return guarantees have spurred investment in the off-plan areas,” says Hussain Alladin, head of IR and research at Global Capital Partners.

“Madinat al Mattar [Dubai South] has seen a surge of transactional activity, as has Meydan. These are indicative of the interest in newly developing communities that are now taking centerstage in the minds of investors. This highlights the growing investor appetite that is not only there for Dubai real estate, but specifically for developing areas [the suburban effect],” points out Alladin.

“We have also witnessed a surge in mortgages, crossing the tipping point, where more than half of the overall activity has been done through the mortgage market. This attests to the appetite of the banking sector in terms of asset-backed financing,” adds Alladin.