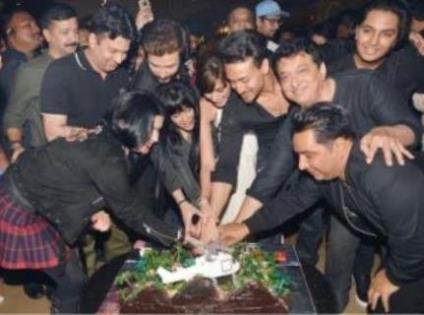 After becoming the biggest opener of 2018, Tiger Shroff-Disha Patani-starrer Baaghi 2 is now the second biggest weekend opener of the year with Rs 73.10 crore in its kitty already. Tiger has thanked his fans for their support and love in a video that he posted on Twitter Monday morning.

Tiger tweeted his video and wrote, “With love #forevergrateful #baaghi2.” Hi everyone! I just wanted to thank you all for all the love and support you have given me and the team of Baaghi. Thank you so much, it just feels so surreal and I feel like I am still dreaming because this was something that I could never dream of in my wildest dreams,” Tiger said in the video.

The entire team celebrated the box office success of the film over the weekend and pictures from the celebrations were shared online.

Directed by Ahmed Khan, Baaghi 2 is a sequel to Tiger’s 2016 hit film Baaghi that also starred Shraddha Kapoor in the lead role and was a remake of Telugu film Varsham.The new film is said to be inspired by Tamil film Kshanam. Before the release of Baaghi 2, film distributor Akshaye Rathi had expressed hopes that it could be Tiger’s first film to cross the Rs 100 crore-mark. “Though his films have made 70-80 crores, I think Baaghi 2 will be Tiger Shroff’s first century,” he said.

Baaghi 2 boasts of a stellar cast that also includes Manoj Bajpayee, Randeep Hooda and Deepak Dobriyal, apart from Disha and Tiger. The film opened to mixed reviews. Rohit Vats of Hindustan Times wrote in his movie review, “Clichés are not the only problem in Baaghi 2 though. It’s a badly planned screenplay that doesn’t know what it wants to be. From chasing Rambo’s trail to taking the baton from Dum Maaro Dum, it tries every trick in the book and manages to make them worse.”