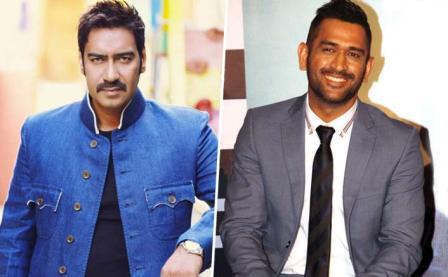 Bollywood actor Ajay Devgn and former skipper Mahendra Singh Dhoni have joined hands for a campaign titled ‘Burn your Fears with which they are urging people to overcome their fears and take the first step towards making their dreams come true.

To mark Dussehra, Star Bharat on Monday unveiled a campaign in sync with the brand’s philosophy of ‘Bhula de darr, kuch alag kar’ and inspire the nation to be fearless, read a statement.

The celebrities have been roped in to take the campaign forward and will be seen in a video produced and directed by Star India’s creative team in association with Leo Burnett.

It shows these icons taking the first step and revealing how they overcame their fears and fulfilled their potential and dreams.

In the promo film, Dhoni talks about how he had to grapple with the security that his job with the Railways entailed and his dream of being a cricketer.

Mithali Raj looks back at the time when she was dissuaded from pursuing cricket, and Ajay talks about how people around tried to stop him from undertaking dangerous stunts.

Actor Sidharth Malhotra along with the other Bollywood personalities will also be seen joining the campaign later.

“Burn your Fear inspires people to conquer their fears, unleash their true selves and chase their dreams. Just like the icons in our brand film. The campaign which culminates this Dussehra will be all about burning one’s fears,” said Amit Chopra, CEO, Entertainment, Star India.