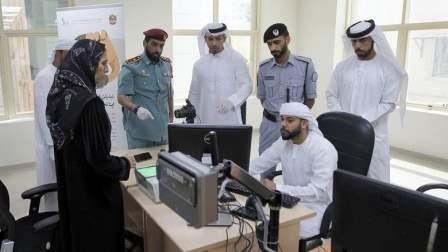 A 76-year-old Pakistani woman, who overstayed in the UAE for over 20 years, was among the 250 amnesty-seekers approached the Sharjah centre of the General Directorate of Residency and Foreigners Affairs (GDRFA) on Wednesday.

Akhtar K., the only son of the woman, said he had to keep his mother with him in Sharjah, but there was no way to sponsor her legally.

She came to the UAE 20 years ago on a visit visa. I couldn't let her return home as it would be difficult for her to live there alone, with nobody to look after her. She always wished to go to perform the Haj. And, she wishes to stay back in Pakistan and die in her home country.

'I decided to make my mother happy by modifying her status to be able to travel back to Pakistan and go to perform the Haj," said Akhtar.

Another amnesty-seeker was Nigerian Adedayo.A, who approached the centre with his eight-member family. "We came here three years ago to set up a business. However, I lost my money and we are staying here illegally for the last three years, with a hope to start from the scratch. However, I couldn't do anything as the overstay fines grew into large sums and I had no way to pay that.

Now, I will regularise my status with a new sponsor and will send my family back to Nigeria," said Adedayo.A.

The Sharjah centre of the GDRFA experienced an unexpected turn out on the first day of the amnesty programme, with 250 people of various nationalities turning up at the centre in the first two hours. Majority of them were women, including absconded Asian and African housemaids. They approached the centre to remove the absconding reports issued against them by their employers.

There were 11 families who received various kinds of services including formalities to leave the country or modifying their status.

Speaking to Khaleej Times, Col. Amin Ali Amin, director of the amnesty centres at the Sharjah GDRFA, said that the turn out was great. "Our expectation for the initial days was much less as many violators prefer to come to modify their status during the last month of the initiative. The number of violators who flocked to the three tents set in the premises of the department is unexpected."

He stressed that the directorate was well-prepared to receive large numbers of amnesty-seekers and it is facilitating all the procedures and formalities that allow them to leave voluntarily or adjust their status.

The directorate prepared three air-conditioned tents with comfortable seats and water dispensers. There are teams comprising officers from the Sharjah Civil Defence and police, assigned to organise the entry and exit of the amnesty-seekers in these centres and provide all forms of support and assistance to them.

The directorate has also provided small stalls to the representatives of the consulates and airlines within the tents to speed up the procedures.