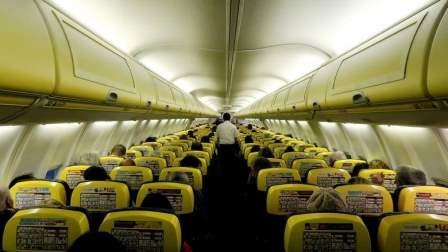 More than 30 passengers on a Ryanair flight, some bleeding from their ears, were reportedly taken to hospital after the cabin became depressurised and the plane had to make an emergency landing in Frankfurt.

A passenger on Friday's said on Facebook that the air went cold, oxygen masks dropped and there was a "dive of 3,000 metres in less than one minute".

The plane flying from the Irish capital Dublin to Zadar, a coastal city in Croatia, descended 8,000 metres from 11,300 metres to 3,000 metres in seven minutes, the ATC said.

A Spanish passenger told local media RTE that they heard a crack and suddenly there was no air in the cabin. The plane was carrying 189 passengers, 33 of whom were hospitalised. Some decided not to continue with their journey, German police said.

Many of the injured suffered from headaches, earaches and nausea and some of them also suffered from nose and ear bleeding, the BBC reported.

Ireland-based Ryanair on Saturday said that the crew deployed oxygen masks and initiated a controlled descent following the in-flight depressurization. It said that the aircraft had landed "normally".

Some of the passengers recounted their experience to the Irish Times. "We get on the plane, we're flying and next of all the oxygen mask comes down, we're left in darkness for 15 minutes, there's no reassurance just people shouting 'emergency, emergency'," Sarah McGarry told the newspaper.

"There was a newborn baby and children on the flight, people are screaming and we don't know what's going on for 15 minutes... Then finally we're told that we're going to Germany."

Passengers also criticised their treatment once they had landed, saying they had not been given enough food and drink and had been forced to sleep on a concrete basement floor or on camp beds.

Ryanair said it would pay for hotels for the affected passengers but added that there was a "shortage of available accommodation".

Ryanair is Europe's largest airline by passenger numbers, according to the International Air Transport Association. It flies in 37 countries and carried 130 million passengers last year.