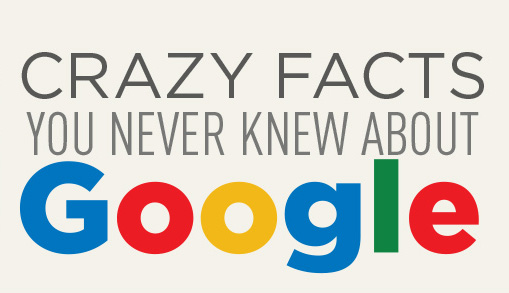 Google was founded by Larry Page and Sergey Brin while they were Ph.D. students at Stanford University, and was formally incorporated as a privately held company on September 4, 1998. You know there's more to something than meets the eye when such a massively successful company has such a simple layout though, and I mean that in the best way possible. Google has always done things a little bit differently, and that works to keep things fresh, immersive and consistently progressive.

Here are some Google facts you may not know!

1. The name 'Google' is actually derived from the mathematical term 'googol' which is basically 1 with a 100 zeros following it

3. As part of their green initiative, Google regularly rents goats to mow the lawns of their mountain view HQ

4. Thanks to Google Instant, you can't actually use the 'I'm Feeling Lucky' button anymore

5. Since 2010, Google has been acquiring an average of one company every week

6. Google uses a web tool called foo.bar to recruit new employees based on what they search for online

7. The first ever Google Doodle was a Burning Man stick figure that came out on August 30, 1998

8. Larry and Sergey's private planes have runways in NASA, where no other planes are allowed to land

9. Google owns common misspellings of its own name as well, such as www.gooogle.com, www.gogle.com, and www.googlr.com

10. The first Google computer storage was built with Legos

11. Google employees in the US get death benefits which guarantee that the surviving spouse will receive 50% of their salary every year for the next decade

12. No part of a Google office is allowed to be more than 150 feet away from some kind of food

13. Google helps pronounce massive numbers if you type '=english' after searching for a number

14. There's a rotated version of Google known as 'Google Mirror', which shows everything in a mirrored avatar

15. Google wanted to sell itself to online company Excite in 1999 for $1 million, but the Excite CEO rejected the offer

Google has turned into so much more than just a search engine, bringing out innovative ideas and trying out new things on almost a daily basis. It's hard to imagine where they'll venture next, though I'm more curious to know what the next Google Doodle is going to be!