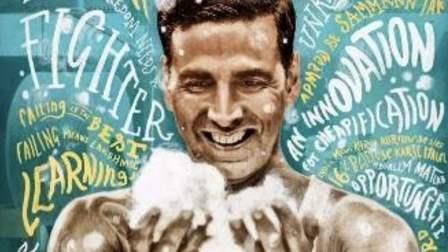 Like every year, a lot of films are ready to hit the screens in 2018. So, know where to put your money

Here's a list of must-see Bollywood films this year:

* "Pad Man": On January 26, it's Akshay Kumar, and no one else. I will put my money on this heart-warming saga of Arunachalam Muruganantham, the man who manufactured economical sanitary napkins even at the risk of being belittled.

Here is another man-of-the-masses part for the ever-enterprising actor who never shies away from seeming less than heroic because he knows that the true hero is the one who dares to venture into the unknown even at the risk of stumbling and falling.

"Pad Man" is directed by one of my favourites R. Balki who courts the quirky with compelling credibility.

In "Shamitabh", it was the Big B giving voice to mute star Dhanush. In "Ki & Ka", a working wife gets herself a happy house-husband. In "Pad Man", gender-sensitisation reaches the cyclic level. Yes, it's that time of the month.

* "Sonu Ki Titu Ki Sweety": Luv Ranjan is a director who gets into the head and the bed of the young without acting like a twit of a director. His remarkable proclivity for youthful candour is in full view in this wackily-titled rom-com where Sonu's (Kartik Aaryan) over-possessive best friend Titu (Sunny Singh) gets a girlfriend Sweety (Nushrat Bharucha). It's a lip-smacking bromance versus romance on February 9.

* "Hichki": For my money and time, Rani Mukerji doing the role of a teacher with a neurological disability is just what the doctors prescribed. This official remake of a little-known American film "Front Of The Class" is the kind of inspirational story we all need in our lives. Release date is February 23.

* Sanjay Dutt's biopic: Ranbir Kapoor playing Sanjay Dutt in a film directed by Raj Kumar Hirani is not quite my idea of an inspirational biopic. Nonetheless, this one is of interest for us to know what mistakes one can make in the journey of life. So this can be taken as an inspirational film in reverse. Verdict is on March 30.

* "October": Titled "October" but releasing in April. A Shoojit Sircar film by any name or in any month smells just as sweet. Sircar teams up with the most successful star of 2017 (not counting Salman Khan) -- Varun Dhawan -- for what the director describes as the most unusual love story. We can't wait for April 13

* "Veere Di Wedding": The sheer joy of watching a gallery of interesting female actors navigated by Kareena Kapoor Khan and Sonam Kapoor is enough reason to give this 'chic-flick' a run for its money. Release date is May 18.

* "Fanne Khan": A famous singer played by Aishwarya Rai Bachchan kidnapped by the father (Anil Kapoor) of a wannabe singer -- an extremely unusual premise and a solid project to bring together Aishwarya and Anil Kapoor after "Taal". Directed by debutant Atul Manjrekar, this remake of a Belgian film promises something unusual. Release date is June 15

* "Gold": If Akshay Kumar owns Republic Day, he also exercises a quasi-copyright over the Independence Day week. On August 15, comes "Gold", a film recreating India's historic win for hockey at the 1948 Olympics.

Reema Kagti's film would be a fictional take on what actually happened. The game of hockey would feature prominently in the plot. But there will also be strong human drama playing at the forefront. And it wouldn't be just the Olympics victory in 1948 we will be looking at. "Gold" will look at 12 crucial years in India's history. Wow! Can't wait!!

* "Super 30": Not kicked by Vikas Bahl's directorial abilities after seeing the mess he made in "Shaandaar". But it would be interesting to see the life of the maths genius Anand kumar brought to life on screen by Hrithik Roshan who hasn't done a biopic before. Releasing on November 23.

* "Zero": Aanand L. Rai gets together with Shah Rukh Khan for a game changer this Christmas. Crucial for SRK who needs a clutter-breaker. Releasing on December 21